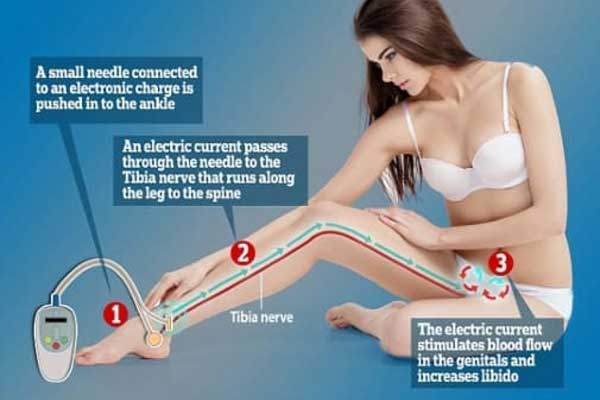 Flowers and chocolate used to be the best options for men who wanted a night of love.

But there is another way to put a “spark” in your love life – giving your partner’s ankle a little electric shock .

Doctors have discovered a key nerve in women’s bodies that can increase their desires.

It runs from the soles of the feet to the bottom of the spine, but is most easily accessible at the ankle, where it can be reached with electricity. In a small experiment with women, they gave a small electric shock at this point with needles and it was also found that there was an increase in blood supply – apparently, like a female version of Viagra. Pioneering therapy physicians believe it could help women with low sex drive.

Tested on laboratory rats, there was an improvement in blood flow in more than 25 minutes, and American researchers are now giving women volunteers a three-month treatment of weekly treatments lasting half an hour.

Tim Bruns, a biomedical engineering expert who is leading the research at the University of Michigan, said:

“We are really hopeful, it can help many women who suffer from sexual dysfunction .
Some studies say that 10 percent of adult women have arousal disorder, but others report that it is as high as 28 percent.”

Many said they were more interested in sex. This may be because the tibial nerve that crosses the ankle meets the nerves that connect to the pelvis within the spinal cord.

A stimulus to the ankle can therefore increase blood flow to a more intimate area, creating the same effect as a night of love. Offering an alternative to drugs, which have mixed results and can have side effects. Research on mice, published in the Journal of Sexual Medicine, showed that three out of four saw significant improvements in blood flow.

The same US researchers are testing 30 women with what is called an arousal disorder .

The results are expected to be released later this year.

Professor Bruns said, “If the stimulation is repeated several times, it can lead to better blood flow and stronger nerve connections to the genitalia. This would improve the symptoms of the genital arousal disorder .”

According to sexologist in Delhi, up to 45% of women are believed to have a dysfunction that decreases their sexual desire.