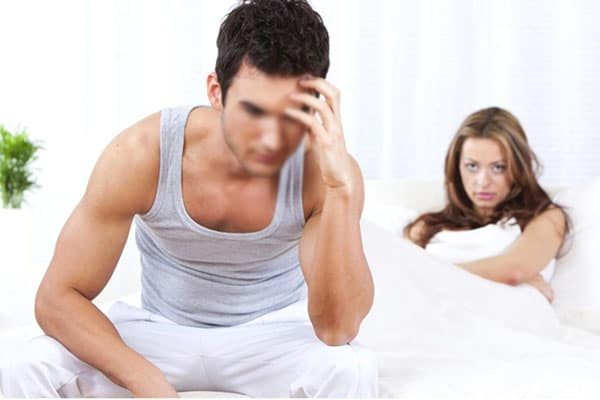 Do I have a problem with premature ejaculation?

How long should sex last? There aren’t any hard and fast rules: the best answer is, as long as the couple involved wants it to. Some couples might be very satisfied with, say, twenty minutes of sexual touching and caressing, followed by intercourse that lasts a couple of minutes; whereas others might enjoy having intercourse lasting ten, twenty, thirty minutes or more.

In the most severe cases, a man might ejaculate just by thinking about or preparing for sex, before he or his partner has even touched his penis (while he is undressing, for example).

If this doesn’t sound like you, but you worry you might be suffering from premature ejaculation because you think you should be lasting longer, then the first thing to ask yourself is, says who? Is it you who wants to enjoy longer intercourse? Or is it that you think your partner wants you to last longer? If it’s the latter, have you actually asked her (or him)? Sometimes we find a man has unrealistic expectations about how long sex should last and thinks he should be thrusting away like a piston engine for hours, based on what he’s heard, read, or seen in the movies… but in fact it turns out that his partner is perfectly happy with the way things are, or even wishes intercourse didn’t go on quite so long! Communication can be a wonderful thing …

If, however, it’s clear that your pattern of ejaculatory control is causing problems for you and your partner, then meet Dr P K Gupta, sexologist in Delhi.

Premature ejaculation is one of the most common sexual problems, affecting around four out of every ten men. The problem is seen most often in:

Most men with this difficulty have always had it, i.e. they have never been able to gain control over when they ejaculate once they are sexually aroused; this is called primary premature ejaculation. In other cases, however, the difficulty can develop later in life, perhaps following years of satisfactory functioning, either because of a change of circumstances, or sometimes as an early sign of the onset of erectile dysfunction or other disease; this is known as secondary premature ejaculation.

The causes are still not fully understood. Although we know that anxiety is perhaps the most important factor and that early sexual experiences are often implicated, it is not certain whether some men also have an inherent physical reason for being more easily aroused than other men are, for example, a difference in the way ejaculatory function is mediated by the nervous system or sensitivity in the skin of the penis.

It is believed that the following factors can all have a role in primary premature ejaculation:

The following factors are more likely to be implicated in secondary premature ejaculation:

What effect does it have?

Premature ejaculation can cause a lot of misery and conflict in a relationship. At an emotional level, the man will often feel ashamed, humiliated and inadequate, while his partner feels frustrated and angry – “this wouldn’t happen if he just tried harder”. If he senses his partner’s annoyance – especially if it spills over into sarcastic and cutting remarks – this will only serve to make the problem much worse. This is because over-excitement and anxiety produce a very similar effect in the body – and both are basic features of premature ejaculation. Hence, the more he thinks, ‘I mustn’t come too soon, or else my partner will be furious’, the more likely he is to do just that.

This means that partners have a crucial role in helping a man to overcome this problem: premature ejaculation treatment in Delhi is much more likely to be successful if the man’s partner is willing to attend sessions at the sexologist clinic in Delhi and to work on the problem at home with him in a kind and co-operative way.

Premature ejaculation can also lead to other problems in sexual functioning, both for the man and for his partner. The man who is worried about coming too soon is likely to get into a number of habits that make sexual dissatisfaction more likely:

Very often, the net result of all this is that the couple starts to attempt lovemaking less and less often; and you won’t need two guesses for on the effect this has on the man’s tendency to come too quickly.

Is there a cure?

Happily, many men are able to overcome this problem in time with the help of sex specialist in Delhi. At the sex clinic in Delhi, you will be invited to attend an assessment interview, ideally with your sexual partner if you have one, where a thorough psychosexual, relationship and medical history is taken, and a tailored treatment plan will be devised.

The early part of therapy will involve helping you both to understand the condition and to share with each other how you feel about it. We will also help you find ways to improve your intimate relationship while treatment is underway. Your therapist may teach you how to practice pelvic floor exercises (also called Kegels) regularly, to help you understand your pelvic area better and to tone your muscles.

Treatment specific to the problem can be divided into two main approaches:

To know more about the treatment, call us or visit us at our clinic in Delhi.